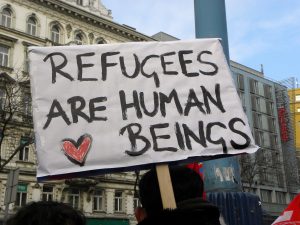 CESNUR would like to seize this opportunity to call the attention of international organizations, governments, and religions on the dramatic situation of refugees seeking asylum for reasons of religious persecution.

On October 23, 2017 we participated in a conference in Seoul, Korea, devoted to the dramatic situation of refugees fleeing from China escaping religious persecution there, including members of the Church of Almighty God, which is banned in China and whose devotees are systematically persecuted there. Most of them fail to obtain asylum in Korea and other countries, with a real risk of being returned to China, where they would be incarcerated or worse. Other religious groups and movements are in the same or similar situations.

Public opinion in several countries sometimes is not able to distinguish between economic migrants and refugees. The distinction is clear in international conventions. In 2004, the United Nations High Commissioner for Refugees published guidelines on religion-based refugee claims. These guidelines clarify that new and non-traditional religions are entitled to the same protection as mainline religions; that individuals should not prove that they have been individually persecuted and a general pattern of persecution against their religious group is enough; and that “persecution” should be broadly interpreted, including prohibition to freely practice and propagate one’s religion.

Decisions by several international courts have also specified that accusations that a religious movement is responsible of crimes are not per se ground to refuse the religion-based refugee claims of its members, unless they are individually responsible for the crimes and there is reasonable evidence that crimes are real rather than trumped up charges created to justify persecution.

On International Religious Freedom Day 2017, CESNUR urges all international organizations, government, and religions to work for the protection of all religion-based refugees and the enforcement of the United Nations guidelines on religion-based refugee claims, including in the paradigmatic case of members of the Church of Almighty God fleeing China, as well as in other dramatic and urgent situations.