Skip to Main Content
178 have already received a departure order; arrest, imprisonment and torture are awaiting them 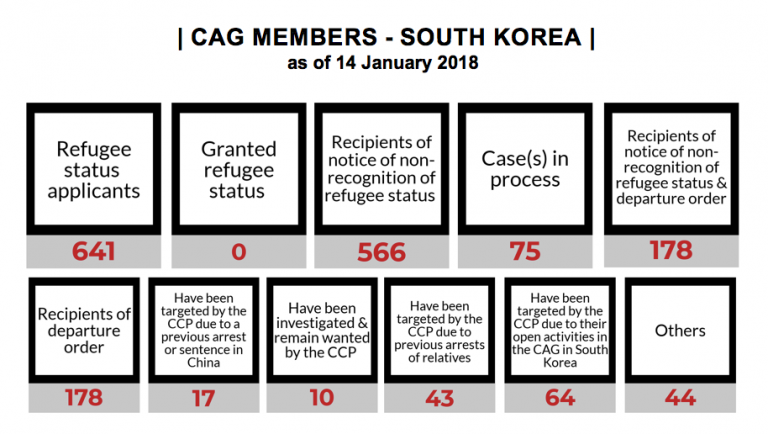 HRWF (18.01.2018) – Seoul has seemingly decided to deport over six hundred Chinese members of the Church of Almighty God seeking a safe haven in South Korea, despite the fact that there is a high risk for them to be arrested, detained, and tortured in China.

Up until now, none of the applicants have been granted asylum, whereas 178 have received a departure order.

How have these individuals suffered upon their return to China?

All listed names are aliases.

Ms. DanChun was arrested by the Chinese police in Fuling, Chongqing, China on 1 March 2013 and was tortured during interrogation in the Fuling Detention Center.

Ms. YouXin was reported and arrested by Chinese police when preaching the gospel and kept in custody at a police station in Hang Zhou, China on December 13, 2012. After being bailed out by the president of her college, she had been kept under surveillance and unable to live a normal life, so she was forced to drop out of school, leave home and live in exile. The Chinese police officers went to her house twice for her whereabouts in June and September 2013 respectively and have been monitoring her mother.

Mr. Liu Yang was arrested and interrogated by the Chinese police in Feixi County, Anhui Province, China when preaching the gospel on 12 December 2012, and was detained for 15 days on the charge of “disturbing the social order.”

Ms. Li Chunlian was arrested by the Chinese police officers from Huichun City Police Station on her way home on 1 June 2005, she was then interrogated under CCP’s Kangaroo Court, tortured and sentenced to one year of re-education through labor, which leads to her lifetime physical disability.

Mr. XiangXin was arrested by the Chinese police in Guangyuan City, Sichuan Province, China when preaching the gospel in July 2004, he was tortured for a month and kept in custody for 15 days on the charge of “disturbing the social order” later on.

Mr. Xu Zhigang was tortured after being arrested by police officers from the National Security Brigade of Yanji City, Jilin Province, China when preaching the gospel on 29 July 2002, and was then sentenced to three years of re-education through labor on charge of “attending illegal meetings and disturbing the social order” without a public judicial process.

If CAG members are deported back to China, their arrest is imminent, which is coupled with the strong possibility of subsequent torture, and sometimes even death.
Three members of the Church of Almighty God were immediately arrested upon their return to China from South Korea.

Mr. Li ZhenYuan was arrested by police officers once he went through the security check at Yanji Airport in China on May 18, 2015.

Mr. Han Feng returned to China seeking medical treatment for his serious heart disease complications in March 2017. He had been monitored for two months before being arrested by the police in Hubei Province when he showed his ID document during a standard procedure. He was detained and ‘brainwashed’ for a span of two months before being released. Since his release, he remains under police surveillance.

Ms. Yan Ru was immediately arrested by the Chinese police upon her return to China from the Church of Almighty God in South Korea on June 2017.

Human Rights Without Frontiers has gathered numerous testimonies of arrest and torture from members of the Church of Almighty God in China. Additional testimonies prove that asylum seekers who are ultimately denied asylum status and deported back to China face a high risk of arrest, detention, and torture.

Human Rights Without Frontiers urges the member states of the European Union & South Korea to grant political asylum to members of the Church of Almighty God who have fled from China in search of a safe haven.